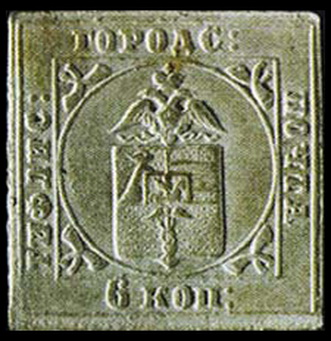 «Tiflis unika», or «Tiflis stamp», — philatelic name of a very rare postage stamp issued in the Russian Empire (on the territory of modern Georgia) for the city post office of Tiflis (now Tbilisi) and Kojori in 1857. The release date and symbolism allow us to speak of the “Tiflis Unika” as the first Russian brand.

The nominal value is 6 kopecks. Postage within the city was 5 kopecks, and 1 kopeck was added for the cost of manufacturing.
Tiflis stamps were toothless, had a square shape and were printed, most likely, in strips of 5 pieces per sheet. They are made of colorless embossed relief, on yellowish paper. On the back is a thick layer of yellowish glue.
The drawing of the stamp is very clear and clear. The drawing shows the coat of arms of Tiflis, and above it — a double-headed eagle with lowered wings. The ancient coat of arms of Tiflis consisted of two parts: The upper half is Mount Ararat with Noah’s Ark on top, the Kura River and the patron saint of Georgia — Saint George on a horse; on the lower part of the shield — the rod of the god Mercury. On the four sides of the outer margin of the stamp are the words: «ТИФЛИС:», «ГОРОДС:», «ПОЧТА», «6 КОП:».

The stamp was created on the initiative of the manager of the postal district in the Caucasus and beyond the Caucasus, N. S. Kokhanov. The original issue was called “paper stamp stamps that have the properties of wafers”, with one stamp (“stamp seal”) required to be pasted for mailing around the city, and three stamps for sending to Kojory (or back).
In the past, it was believed that the Tiflis stamps were issued in November or December 1857, but earlier than December 10 of the same year — the date of the appearance of the first stamps of Russia. According to new data, they were released on June 20, 1857. They were used in circulation on the territory of Tiflis and Kojor until about 1865-1866.
According to other, earlier information, the stamps were in circulation for a short time and were canceled on March 1, 1858, when all-Russian stamped envelopes and stamps began to be used in the Caucasus.

For the first time, the philatelic community started talking about the fact that there was a city post office in Tiflis and that a special city postage stamp was used for local letters there in the 1880s. However, at that time, no one had yet seen the brand itself. Nevertheless, this did not prevent the publisher of the largest catalog of postage stamps in its time, Moensu, from 1889 onwards, constantly reporting about it in each new edition, raising the question: fr. «Il y a des timbres, mais lesquels?» (“There are stamps, but which ones?»). With the discontinuation of the publication of this catalog at the end of the XIX century, information about the Tiflis stamp for some time ceased to be placed in catalogs.
In 1933, the description of the brand is given in the catalog “Michael”, and since 1934, the image of the brand appeared in” Michael”.
In 1941, the stamp was again placed in the catalog published in New York by S. V. Prigar under the title “Russian Mail in the Empire, in Turkey, in China and mail in the Kingdom of Poland”. Later, in 1957, the Tiflis stamp was included in the English specialized catalog for stamps of Russia, compiled by D. Reynolds, and in the German catalog “Lipsia”. Moreover, in the last catalog, the stamp’s drawing and inscription were distorted.
The name of the brand “Tiflis Unika” was proposed in 1929 by the Baku philatelist Sergey Ivanovich Kuzovkin.

Before the First World War, only three copies were found. The first copy, known to collectors, was bought by the architect K. K. Schmidt in 1913. During the 1910s-1920s, all three copies of the Tiflis stamp were purchased by the famous philatelist Agafon Faberge (son of Peter Karl Faberge), who emigrated from Russia: The first and best copy is from George Kirchner, the second — from V. Werkmeister.

These stamps were exhibited at the philatelic exhibition in 1928 in Helsingfors (now Helsinki, Finland) and at the international exhibition “WIPA-33” in 1933 in Austria. Everything that was shown at this exhibition was mortgaged, transported to London and sold at auction in 1939. On November 20, 1939, the best copy of the “Tiflis stamp” for 28 pounds sterling was bought by J. Wilson.

The second stamp was bought for 25 pounds by T. Lavrov for the collection of H. Stubbe. On October 2, 1957, this stamp was sold for 180 pounds. It was purchased by R. Davidson. Subsequently, it was in the collection of R. Bergman and was sold on March 24, 1971 at auction in New York. The price of the brand was brought up to 7250 dollars. The sensational sale was commented on by New York newspapers, noting that this is “the largest amount of money received for a Russian brand.” On October 15, 1985, it was mentioned in connection with the auction sale of the collection of N. D. Epstein.

Later, two stamps were in the collection of the famous philatelist and expert of Russian stamps Zbigniew Mikulski, who lives in Switzerland, who showed them in 1997 in Russia at the World Exhibition “Moscow-97”. The third copy, the worst preserved, came to the collection of the daughter of the famous collector Berlinger from Luxembourg. In 2000, Zbigniew Mikulski sold copies that belonged to him for half a million dollars, while the name of the new owner of the stamps was not reported.

On October 5, 2008, at the largest philatelic auction David Feldman SA (Geneva, Switzerland), one of the three copies of the Tiflis Unica known in the world at that time, previously owned by Zbigniew Mikulski, was sold for 480 thousand Euros (which amounted to more than 700 thousand US Dollars).

In March 2011, another unquenched copy of the “Tiflis Unika” was found in the vault of the National Postal Museum at the Smithsonian Institution in Washington. It was in the collection of G. H. Kestlin, a Russian philatelist who lived in Great Britain, donated to the museum in 1984 by his heirs.

To date, eight copies of the Tiflis unika are known.