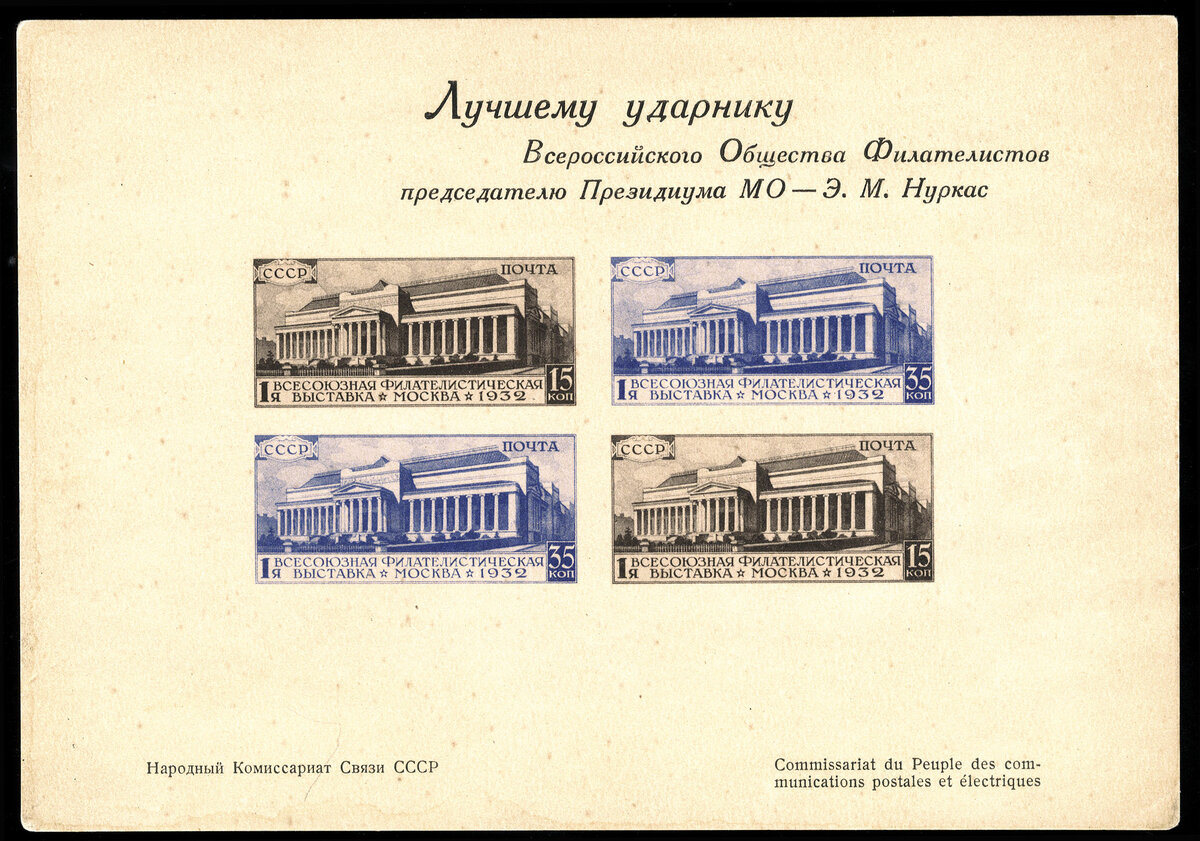 On December 5, 1932, the 1st All-Union Philatelic Exhibition opened in the building of the Pushkin State Museum of Fine Arts. In fact, she was the second. The first All-Union philatelic exhibition, called the “All-Union Exhibition on Philately and Bons”, was held much earlier, from December 14, 1924 to February 1, 1925 in Moscow. It was initiated by one of the founders of Soviet philately, Fyodor Grigoryevich Chuchin – who at that time was the Commissioner for Philately and Bonds in the USSR. The exhibition of 1924-25 was very large-scale and truly international. Philatelists from dozens of countries gathered in Moscow, and the Dutch, Turks, Swiss and Lithuanians even received awards for their exhibitions.

But government policy has changed significantly over the next seven years. Chuchin’s exhibition was too … well, capitalist. Private individuals presented their private collections and collections, and private individuals received awards. In 1932, this arrangement was no longer suitable. Therefore, the organizers of the 1932 exhibition turned a blind eye to the 1924-25 exhibition and called the new exhibition the First. There were no private philatelists with collections there any more – at the 1st All-Union Philatelic exhibition the state collections of the People’s Commissariat of Communications of the USSR were presented. Let’s face it-these were good and rich collections, but very limited due to the ideological component. In fact, this was the reason for the change in the format – in private collections, there could be stamps of ideological enemies.

For all philatelic exhibitions around the world, postage stamps are necessarily printed that glorify these exhibitions (of course, this statement applies only to global, state-scale exhibitions). Plus, the exhibitions themselves always (including local ones) print their own non-postal, souvenir stamps.

The People’s Commissariat of Communications of the USSR for the 1st exhibition issued two souvenir stamps with the image of the Pushkin Museum (drawing by Vasily Zavyalov) in denominations of 15 and 35 kopecks, printed on paper with a watermark. They were put into circulation on the opening day of the exhibition, December 5, 1932.

In 1932, for the 1st International Philatelic Exhibition in the USSR, they decided to join the world-wide format and also print a block of 168×120 mm in size. And they printed it-in 500 copies. It was not intended for free sale (although you could cut a stamp out of it and stick it on an envelope if you wanted), so it is more correct to call it a “souvenir” rather than a “postal”one. Its 500 copies were attached to the invitations to the exhibition for the guests of honor.

As you can see, on the block, in addition to 4 stamps, there was an inscription «Народный комиссариат связи СССР» and its dubbing in French – “Commissariat du Peuple des communications postales et électriques“. The souvenir sheet was handed over to the exhibition management, which, in fact, was engaged in sending out invitations. Naturally, the blocks “settled” in the collections of the invitees or were subsequently transferred by them (resold). Today, several such blocks can be found in free sale (mainly at auctions), their starting price is on average $ 20,000. Of course, the circulation is 500 copies. Rare!

Moreover, at the exhibition, it was possible to extinguish the block with a special red extinguishment. But almost everyone left their blocks in their pure form – so the hash is now worth some generally unintelligible money.

But in fact, the circulation of the blocks was not 500, but 525 copies. What were the mysterious 25 sheets? They were named names. They were overprinted “The best drummer of the All-Union Society of Philatelists“. They were sent not to anyone, but to 25 people who made the greatest contribution to the development of Soviet philately – all of them took part in the organization of the exhibition.

But there is an even more subtle division. Such blocks, as in the picture above, were not 25, but 22. On the last three blocks with the overprint “The Best drummer of the All-Union Society of Philatelists” there was another, additional, hand-made overprint-indicating the specific position and name of the invited person. As we can see in the photo below, one of the blocks was intended for «председателю Президиума МО – Э. М. Нуркас». MO is the Moscow Society of Philatelists.

The second block with a personal message was received by the then Chairman of the Presidium of the Leningrad Society of Philatelists. And the third – none other than Henrikh Grigoryevich Yagoda, at that time – the head of the secret operational department of the OGPU and a fanatical philatelist.

Each of the named blocks is a so-called unique, that is, a brand that exists in a single copy. The exhibition ended. The blocks were deposited in the recipients ‘ personal collections. But the fate of the three named blocks is interesting. Unfortunately, I do not know who headed the Presidium of the Leningrad Society of Philatelists in 1932, and I could not find this information. But according to rumors, he was repressed and shot in the late 1930s. Henrikh Yagoda, as you know, was also shot-on March 15, 1938. Their blocks may or may not have been preserved. It is quite likely that somewhere there was a block with a personal overprint to Yagoda (look in the grandfather’s album!), and its starting price, I believe, will be about 800-900 thousand dollars.

In 2008, the Nurkas cardboard appeared at the Cherrystone philatelic auction and was sold for crazy money – 776250 US Dollars.

Interestingly, in 1997, the block received a “second life”. Not the name block of Nurkas, but the usual one, without an overprint. At the initiative of the Canadian Society of Russian Philately, a small print run of “cardboard-97” was made, which completely copies “cardboard-32” and differs from it by a commemorative inscription on the front side and an inscription on the back.